If ten years ago, when I first walked into an empty warehouse, somebody had told me that I was walking into one of the greatest adventures of my life, I would have had my doubts. But such is destiny! The following lines are not only a behind the scenes recollection of events and individuals, but most importantly, a narrative of the invisible ideals that make the Zhou B Art Center a visible reality. It would be difficult to imagine ten years without the support of Chicago artists—many of whom have found a creative home at the Zhou B Art Center or have been one of the thousand and some artists that exhibited their work here during the first decade. The Zhou B Art Center was built by artists, with artists, and for artists. Doubters and critics have also come along, often failing to see beyond the brick and mortar walls that enclose the former Spiegel warehouse. But history is made from invisible ideals, dreams, and convictions brought forth as a palpable reality for others to see and experience.

Anyone with access to resources can build an artists loft, but to build an art community like the Zhou B Art Center, one would need vision, confidence, financial means, and a small band of faithful dreamers. All of which the Zhou Brothers have been acquiring over their forty years of collaboration. The first time I saw them, I was an art student at the School of the Art Institute of Chicago. A friend and I attended the Chicago International Art Expo 1994 at Navy Pier. There, on a sunny Chicago day at the open pier facing Lake Michigan, stood two Chinese artists wearing black hats. Already, they projected an impressive aura about themselves. They were painting live on a 32,000-square-foot canvas that covered the end of the pier. Every art fair guest was encouraged to take a long brush from one of the five gallon buckets and participate in the creation of the giant canvas as the Zhou Brothers quietly painted alongside. Like many others, I took a brush and made some minimal marks on the canvas. I was close to the Zhou Brothers but did not dare say a word. For someone like me, who grew up in Mexico City and never met a living artist until the age of eighteen, the art world seemed unreachable. There was nothing really magical about my first encounter with the Zhou Brothers other than a personal wish that, one day, I would know artists like them. It must have been a silent prayer. Such was my impression that I purchased the 300-page catalog with the little money I carried around as a student. I cut off about ten pages of the catalog to make a small book of my favorite works in the fair. Among those pages were four images of the Zhou Brothers. Twenty years later, that small book still sits in my studio.

In 2004, while I was finishing graduate school at Northern Illinois University, Javier Chavira, Carla Carr, Kimberly Harmon and I opened 33 Collective Gallery in Chicago. We visited various venues but were not convinced with any of them. One morning, I called my friend Ruth Crnkovich, who was starting her own curatorial/appraiser business. She told me she was going to open her new office in Bridgeport, at a massive 80,000-square-foot building owned by the Zhou Brothers. It was then that the Zhou Brothers name came to mind again. “Wow, these are the two artists I saw ten years ago at Navy Pier,” I thought to myself. Knowing nothing else, I called the number Ruth gave me and made an appointment to see the building. I expected an assistant to show me around, but to my surprise, it was the Zhou Brothers who personally came to open the doors. As they graciously and attentively took Javier and I through each floor in this big, empty building, they shared their vision for what would be called the Zhou B Art Center. The only studio built as of the time of our first visit was that of artist Martin Bernstein. His studio served as the showroom. After about an hour-long tour, we shook hands with the Zhou Brothers and said “yes” on the spot. A couple weeks later I met then curator Oskar Friedl at the Chicago Cultural Center during a live painting performance by the Zhou Brothers, and he gave me a set of keys to our new studio. As I stood in the back of the crowded hall, I caught a glimpse of the brothers’ performance, which coincided with their solo exhibition on the fourth floor of this institution.

The live performance at the Chicago Cultural Center was my second opportunity to see the Zhou Brothers work together. They have an incredible way of collaborating. They call it a “silent dialog,” about which many essays have been written. To me, they approach painting in the same way they approach life: with a sense of feeling, passion, assertion, and conviction that transforms dreams into reality with almost seamless effort. However, behind the smiles that follow the great live art performances at the Chicago Cultural Center, the United Nations, The World Economic Forum, The Coronado Theater or the Forbidden City, and under the blinding flashes of countless photographers, lies a history of struggle against the odds. To read their personal biographies is to appreciate the long, tough journey they have taken together. Their path has been filled with joys but marked by significant, difficult events. Adversity has a way revealing opportunities to those whose visionary eyes have the ability to see them. 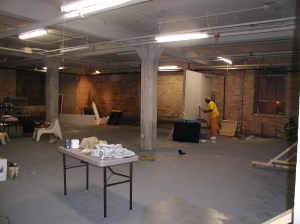 Looking back, they began building the art center from where it really matters, the heart. In the early years, they hosted numerous private parties at their home studio located just a couple blocks away from the art center. A handful of artists from the Zhou B Art Center were invited. We were treated with respect as we mingled with the Brothers’ black-tie guests. The Zhou Brothers showed us that success does not require alienating others who do not share the same fortune. Instead, they made themselves available to us, and as a result, community was born. Such openness served as a preamble to the many years that followed. As a young artist and curator myself, I looked on in awe as their accomplishments continued to grow over the years and their art careers seemed to skyrocket to the top. However, in personal conversations, they were always the same—assertive, direct, and strangely humble. Despite their ascending success, as if they could see beyond the moment, their commitment to make the Zhou B Art Center into a playground and a platform for artists remained strong,

In January 2010, I was given the opportunity to create a concept and curate my first exhibition in the main gallery of the Zhou B Art Center. As a result, the National Wet Paint MFA Exhibition was born. The concept was simple: to bring to Chicago the top MFA painters from the country’s prestigious colleges and universities, in order to gauge the state of painting in the U.S. The Zhou Brothers willingly supported my idea and committed to fund the project so that artists did not have to pay a fee for submitting their work. Over the years, Wet Paint grew into a biennial show and today continues to grow in importance. As I began curating on a continuous basis, until taking the title of Director of Exhibitions, the Zhou Brothers were never micromanagers. Instead, they provided advice, freedom of function, independence and trust. This is the true gift of leadership: to provide room for growth, maturity, and freedom at the risk of failure and losing control. It was then that Michael Zhou, son of ShanZuo, became the Executive Director of the Zhou B Art Center. Michael received a degree in business and, although not an artist in terms of practice, is a true artist at heart. 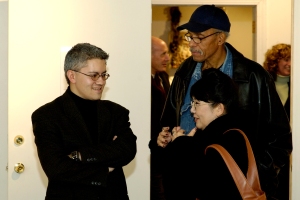 William Shakespeare once said, “It is not in the stars to hold our destiny but in ourselves.” Michael Zhou and I began to work more closely together on exhibitions when the Zhou Brothers’ international travels became more frequent. As we did, the sense that destiny is something to be found and claimed began to shape the way we worked. Moving the center’s future exhibitions forward never required us to hold many formal meetings. Meetings have a tendency to create agendas for future meetings, resulting in a vicious cycle. Instead, long hallway conversations, casual brainstorming gatherings, and occasional scheduled meetings gave form and shape to the last five years of wonderful exhibitions, such as Chicago’s Twelve and the National Self Portrait Exhibition, among others (one per month, year round). Giving Chicago artists a primary voice and forum became an integral part of our mission. Unlike many other institutions where good ideas may get stuck or simply die in board meetings, Michael has organically moved us forward along the ideas that make sense for us. From one level to the next, his commitment to giving continuity to the Zhou Brothers’ vision has become his very own. We have traveled together to Taiwan and Italy to establish meaningful international collaborations, which are now expanding to Kazakhstan, Germany, Spain, Taiwan, China, Korea, and Mexico.

Increasingly, the Zhou B Art Center became a place not only for exhibitions but also for special events, which in turn introduced the art and the artists in the center to a wider audience. To expand this opportunity, Donna Bliss became the Director of Special Events in 2009 and under her leadership, countless amazing private and public events brought increasing number of guests, many of which have become faithful friends of the center. One of the most memorable special events was the Zhou Brothers Live Painting Performance collaborating with the Chicago Sinfonietta under the baton of Maestro Mei-Ann Chen. The highly anticipated event took place on September 28, 2012, on the second floor of the Zhou B Art Center. Important guests and dignitaries witnessed a rare opportunity to see the Zhou Brothers engage in the art making process. While the Chicago Sinfonietta played Vivaldi’s Four Seasons, the abstract painting that was created followed the fluidity, color scheme, and expressive force characteristic of the Li River painting series. This year, Donna evolved from her former position to Vice-President Creative Development as she makes the Zhou B Art Center known to a wider audience.

No other contemporary artist in Chicago has achieved the international success the Zhou Brothers enjoy today. They have outgrown the gallery system altogether and now embark on monumental projects working only with museums and the private sector worldwide. Their painting prices now start in the six figures. In the last two years, the White House has twice commissioned their work for important occasions. Soon they will unveil their most ambitious project to date, in the heart of Beijing, China. However, I do believe that in their minds, the best is yet to come. Over the years, they have carefully planned their legacy. Their entire philosophy of life and art can be summarized in a simple statement, “Feeling is Liberty,” which also serves as the title of the center’s tenth anniversary celebration exhibition. Although short, this phrase reflects a life-time devotion to art and to empowering future generations of art makers. To recognize the Zhou B Art Center as an important, privately owned institution in the art world today is to accept that the American Dream still exists. Founded by immigrants, the Zhou B Art Center embodies a multi-cultural richness and an artistic calling unique to Chicago. Celebrating ten years, for me, is to remember that when I walk into the Zhou B Art Center, I am walking with giants. Not giants who instill fear, but who walk fearlessly ahead of me, clearing a road where there was none before. 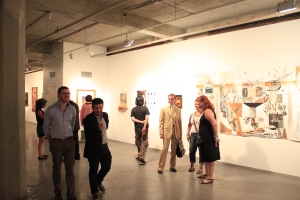